Critical power or CP is a mathematical concept that describes the limits of human performance. This concept constitutes of 2 parts, the critical power and W’. The critical power is the asymptote of the power output that can be sustained indefinitely. W’ (pronounced as “w prime” and previously incorrectly called anaerobic work capacity) is the amount of work that can be performed above CP. This image shows a CP plot: 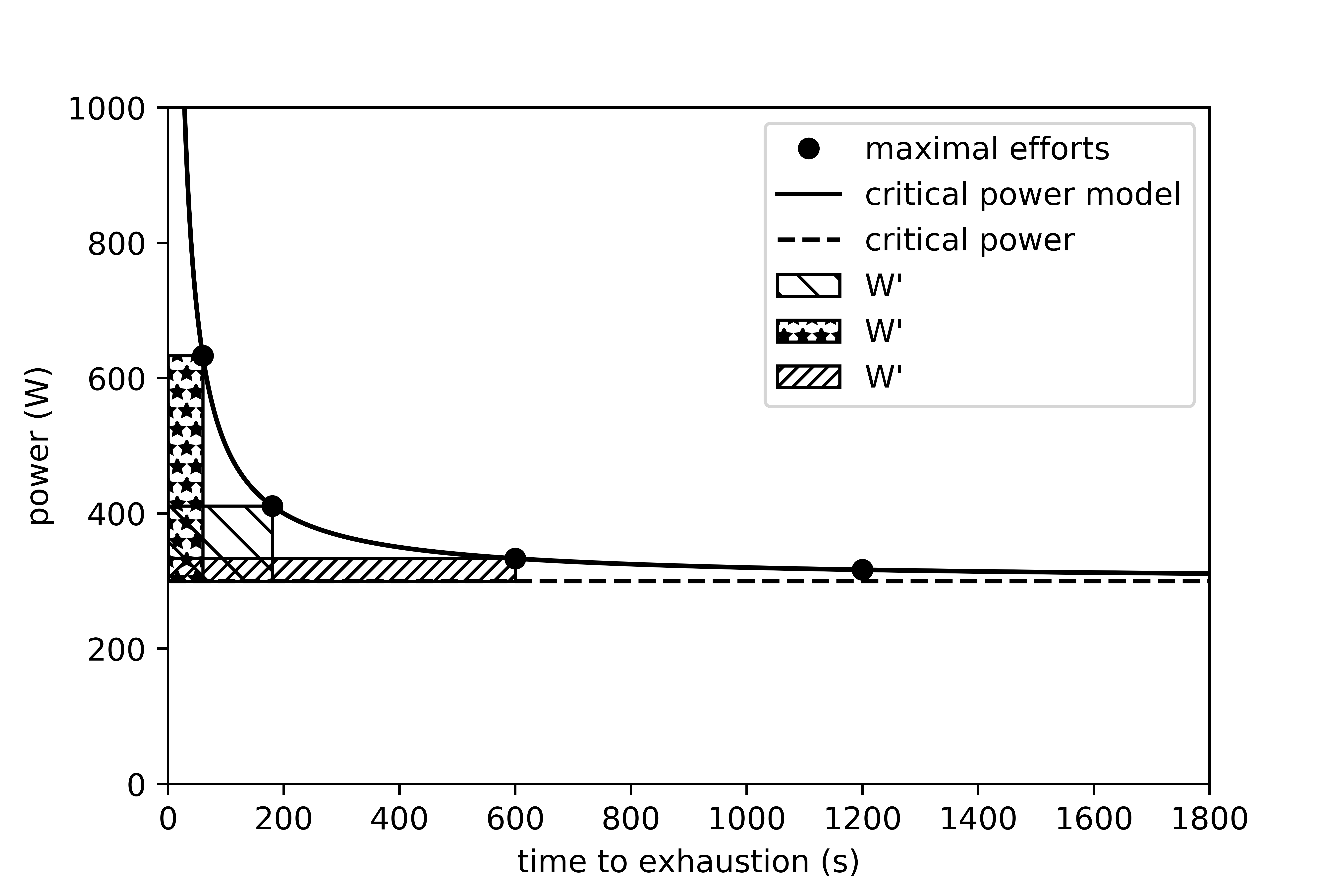 There are a few ways to measure or estimate the CP of an athlete. One way is to have the athlete perform a few all out efforts of different durations and calculate the CP via a best fit. This method is time consuming because all efforts need a lot of rest in between to be considered proper all out efforts and is therefore also prone to errors. As an alternative, the 3 minute all out test (3MAOT) was introduced by Vanhatalo et al in 20071. The idea behind it is that it is possible to deplete your W’ in reasonably short time (<150 seconds) and that the power output that can be sustained after that moment is equal to your CP. The protocol of a 3MAOT is quite simple: start as hard as you can and keep going as fast as you can for 3 minutes (you could also describe it as an extended Wingate test). No pacing is allowed. The average power output of the last 30 seconds is the CP, the amount of work that is performed above that power output is the W’.

Within Critical Powers (yeah you can guess were this name comes from…) we discuss CP and testing a lot and that got us wondering how hard this 3MAOT actually is and what the data looks like. We decided that Martijn would be the guinea pig to do the test and that we would record it on video as well. The test was performed at WattWorks on a Wattbike Pro. As we were not doing scientific research we did not care too much about standardizing the protocol so Martijn was free to do the warming up he preferred. For the test the air resistance of the Wattbike was set to 10 and the magnetic resistance on 5, chosen to give him a cadence of 60–70 rpm at his estimated (based on workout data) CP of 360 Watt. The 3MAOT started 60 seconds after we started recording the video. Martijn could not see his power output and elapsed time and he was free to do the test standing or seated and switch in between. This is the video we shot:

In the chart below we plotted the power together with 30 second rolling average power: 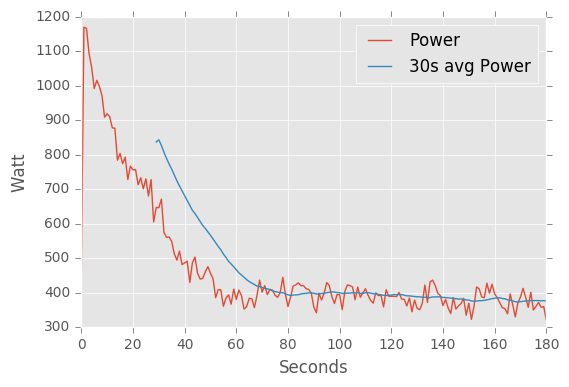 As you can see after ~80 seconds the 30s rolling average power has already almost stabilized. This could be interpreted as a sign that W’ was almost depleted at that moment: Only 1668J (8% of total) of the W’ prime was produced after the 80 second mark (56% of test time remaining).

The calculated CP is somewhat higher than expected but that might be due to the fact that this test is performed in different conditions than the data we based the estimation on. The values for CP and W’ would result in an estimated 4009W, 678W, 435W and 390W for 5 seconds, 1 minute, 5 minutes and 20 minutes respectively. The 5 second value is obviously way too high, which is a know issue with the critical power concept. The 1 minute value of 678 Watt is what Martijn expects to be able to do based on his workout data (the average power of the first minute of the test was 656W). The 5 and 20 minutes values appear to be 5–10% below his actual ability based on workout data. We do not know what the cause of this discrepancy is.

What initially surprised us is that the heart rate slightly dropped during the test after reaching its peak at 46 seconds into the test. After some discussion we suspect that due to the VO2 slow component (the phenomenon that oxygen uptake keeps rising untill about 15–20 minutes into a workout; read more about it here) the heart rate would rise and approach its maximum again if the test would have been extended. To put the maximum heart rate into perspective, Martijn has recently reached maximum heart rates of 180–185 bpm during workouts. The difference is quite big and could be explained by either fatigue or pacing or a combination of these two. 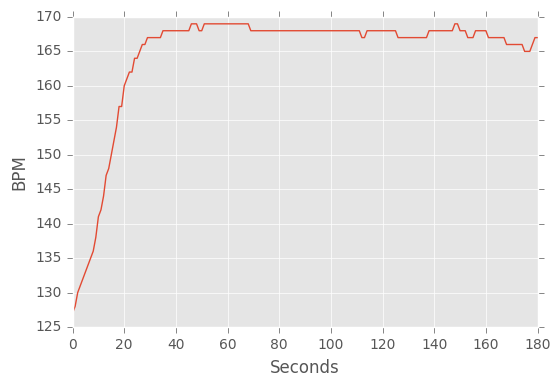 Martijn declared after the test that he did not really have a notion of time during the test and that the end came quite sudden for him but that he felt that he had nothing left in his legs after a relatively short time already (in retrospect probably around 60 seconds). He felt that his lungs/breathing were the limiting factor. Conclusion

All in all it was very interesting to see how the data of 3 minute all out test looks like. It was surprising to see how quickly the power stabilized and that heart rate actually dropped towards the end of the test. The resulting CP and W’ seem to only predict some durations accurately, but Martijn did not do a lot of testing recently and this test was performed in different conditions than his workouts.