The pedaling motion is characterized by a circular movement where the goal is to deliver as much work as possible by maximizing the tangential (i.e. perpendicular to the crank arms) force on the pedals. It is known that the force curve describing this tangential force is not constant throughout a pedal revolution but instead contains dead spots where the crank arms are vertical (see figure 1; most likely because it is difficult for cyclists to apply the horizontal tangential force at those locations). The force curve also contains a maximum during the downward motion of the cranks at which the force is the highest. The angle at which this maximum force occurs is the peak tangential pedal force angle. This article will focus on this angle to gain an understanding on the relationship between power and cadence and this angle.

The tangential forces during 1 revolution can be plotted in 2 ways: With a traditional Cartesian coordinate system (figure 1) or with polar coordinate system (figure 2). The latter gives a nice visual representation of the pedal revolution that makes it slightly easier to compare the timing of the forces during the downward motion of the left and right leg.

The angles in the Cartesian plot correspond to: 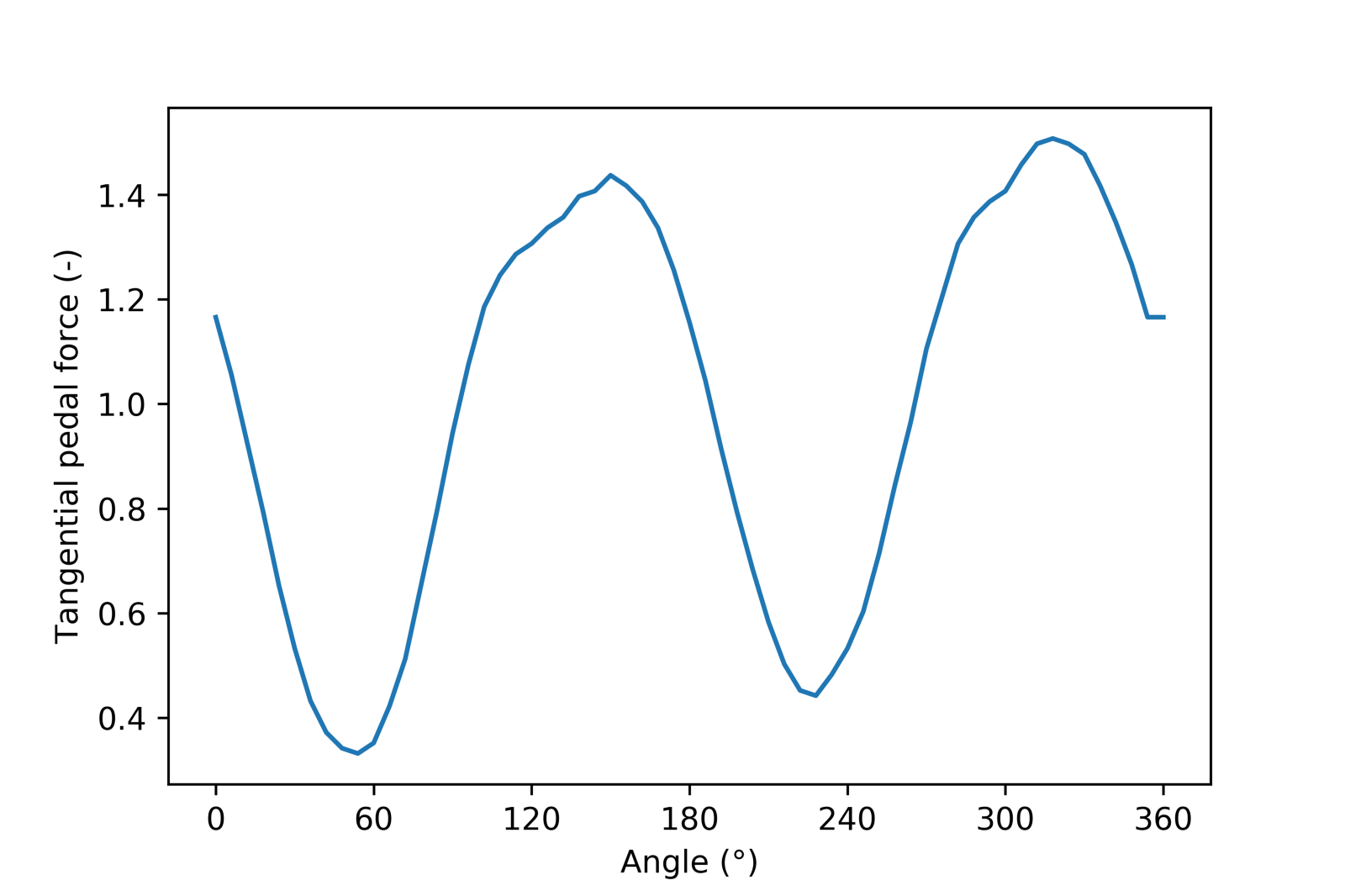 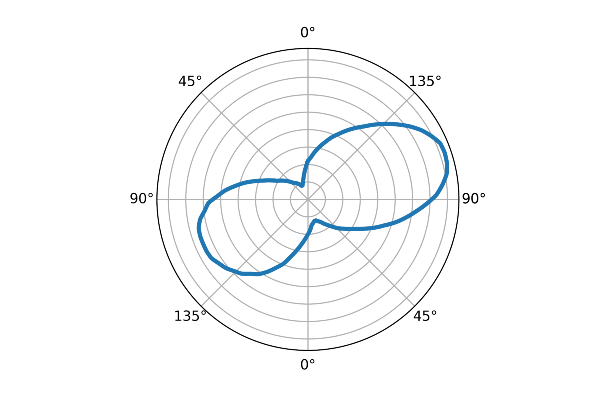 The Wattbike indoor bike measures a resultant of the tangential pedal force by measuring the tension on the chain. The chain tension is measured with a constant sampling rate of 100 Hz which results in a different number of datapoints for each pedal revolution depending on the cadence. The excellent (yeah… I wrote it myself) library wblib interpolates and normalizes these datapoints to 360 datapoints per revolution (1 datapoint per degree) so analyzing the data is quite straightforward.

All Wattbike workouts for 1 athlete (me, the author) between January 1st 2017 and December 1st 2017 are downloaded via a custom script from the Wattbike Hub servers. The total number of workouts is 33, containing a total of 164564 pedal revolutions. The entire dataset would take up about 4.5 GB so only a subset without the raw polar plot data is available here. 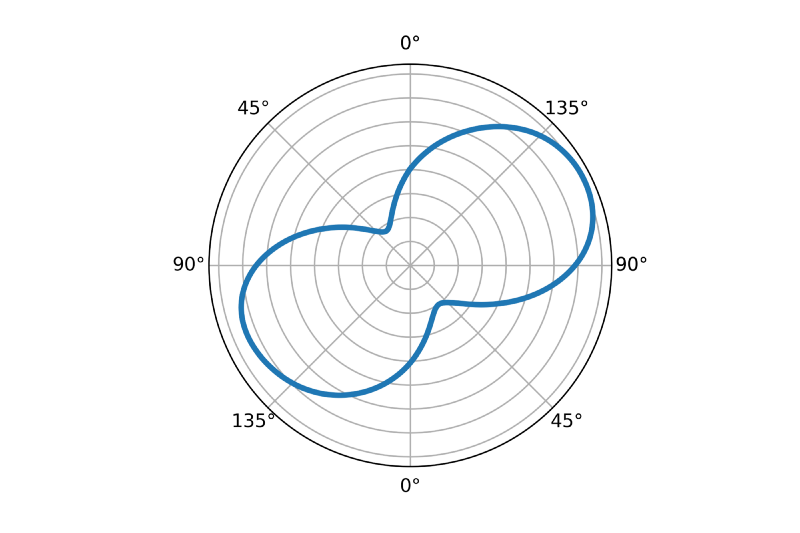 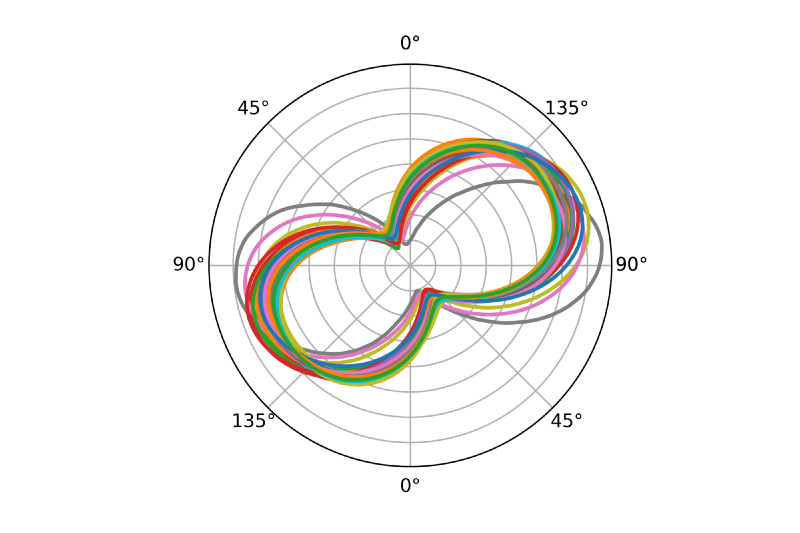 If the average polar plot for each workout is plotted separately like in figure 4 above, you can see that although the main characteristics of the plots (shape, peak angle, ‘height’ of dead spot) are similar, there is some variation between workouts. The brown-ish and blue polar plots are most distinguishable from the rest and happen to correspond to the two shortest workouts (containing only 21 and 215 revolutions each) where the cyclist probably only recorded part of a warming-up. 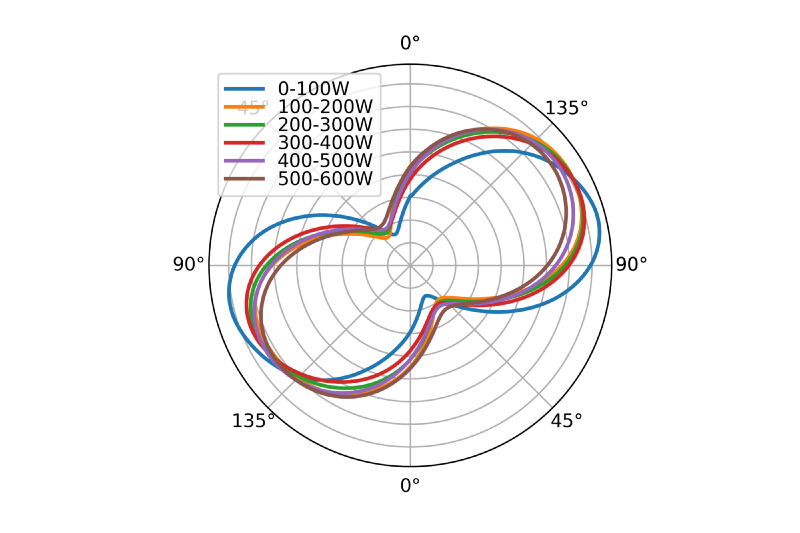 When we look at the polar plot for different power ranges a similar result is shown (figure 5). Although there is some variation between power ranges, the overall characteristics are very similar, with the exception of the range 0–100 W. At first sight there does not seem to be an obvious relationship between power and peak angle.

When the same plot is made for cadence (figure 6) it looks like there is more variation and also a positive relationship between peak angle and cadence: higher cadence appears to correlate to higher peak angles. The overall shape of the polar plots stays very similar between cadence ranges although the dead spots are less ‘dead’ at higher cadences. One thing to note here is that the polar plots for higher cadences are smaller. This is most probably a result of the fact that the forces of which each polar plot consist are normalized to the mean force of that single pedal revolution, therefore a ‘smooth’ force curve will result in a smaller polar plot than for a force curve where the peak force is more pronounced.

To calculate the model describing these data a linear mixed model is used. This type of model can be used to calculate linear regression in the form of y=a*x + b (but also for multiple independent variables) where the samples are grouped into subsets. The model parameters are shown in table 1. 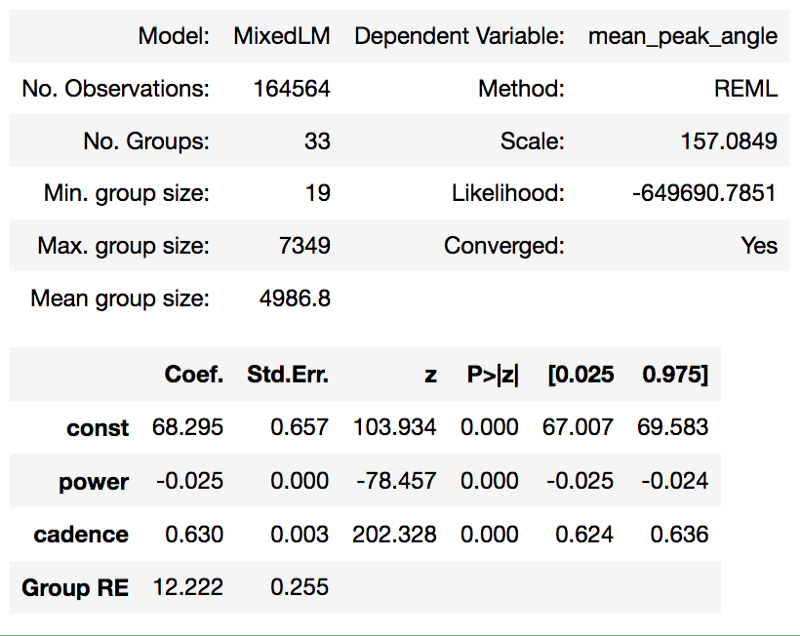 The resulting formula for the model is:

Although it might sometimes appear as if high power results in high peak angles, the opposite is true: The model parameters show that high peak angles correspond to high cadence and that power even has an inverse relationship with peak angle. There are however a few points to keep in mind when interpreting these results:

Although the coefficient for power in the model is smaller than the coefficient for cadence, during a typical cycling workout the variation in power can be much larger than the variation in cadence: Whereas the power can change from e.g. 100 W to 500 W (resulting in a decrease in peak angle of 10°), the cadence can only change from e.g. 70 rpm to 110 rpm (resulting in an increase in peak of 25°). If you look at the data like this the effect of power is still smaller than the effect of cadence but not as small as you would expect when only looking at the coefficients of the model.

The dataset contains only data from 1 cyclist. The relationship between power, cadence and peak angles might be existent for this cyclist but not for another. I am working on gathering more data to do the same analysis for more cyclists. Get in touch with me if you are willing to donate your data. :)

This article is also available here as an interactive notebook which also contains the data and the code to analyze the data.