In this article a comparison is made of the different W’balance algorithms that are circulating. It is assumed that the reader is familiar with power duration models, the 2-parameter critical power model and the W’balance concept. If you are not familiar with these, Jones et al. (2017)1 is a good primer. If that article is too complicated then this article will probably be too complicated as well, sorry about that… The article is probably not complete and also not intended to judge or validate any of the algorithms. The algorithms that are discussed are the original (integral) Skiba2 algorithm, an optimization (approximation) of the Skiba (integral) algorithm by Dave Waterworth3 and the Froncioni/Skiba/Clarke (differential) algorithm4. All the algorithms are implemented in the Python library athletic_pandas.

The integral algorithm is the best known algorithm to calculate W’balance and has been scientifically validated5. The formula’s for the algorithm are:

Where $W′_{bal}(t)$ is equal to $W′_{bal}$ at time t, W’ is the amount of available energy above CP , t the time for which $W′_{bal}$ is calculated, u the iterator of the summation, $W′_{exp(t)}$ amount of energy above CP that is used at time u (expended), e the Euler number and $\tau_{W′}$ a time constant that describes the recovery speed. The numbers 546, -0.01 and 316 are determined in Skiba’s original article and do not change between persons. $D_{CP}$ is the difference between CP and the average power of the intervals in which the power was below CP. $D_{CP}$ can be calculated dynamically (the average until time t) or calculated once for the entire workout and used as a static value. Skiba recommends using a static value for $D_{CP}$ (citation needed).

The original integral algorithm is quite expensive to compute, even on fast computers, since the summation has to be run for every time t again. Mathematician Dave Waterworth helped core developer of GoldenCheetah Mark Liversedge to develop an optimization of the Skiba algorithm3. This reformulation is an approximation of the Skiba algorithm so results can vary a little in extreme cases, especially when $\tau_{W′}$ is very low. A comparison of these two algorithms is shown later in this article.

The differential algorithm was developed by Skiba et al.4 to cover some of the drawbacks of the original (integral) algorithm, namely he fact that it was developed for cycle-ergometer exercise specifically and that it contained coeffients that have to be estimated. At the same time Andy Froncioni was developing a similar approach. The resulting algorithm is a combined effort of Froncioni and the authors of the the cited article4. The differential algorithm is the default algorithm for the calculation of W’balance in GoldenCheetah. This algorithm describes a W’balance recovery that is similar to the integral algorithm but where the speed is only dependent on the power under CP ($D_{CP}$) and the difference between W’balance and W’ remaining (i.e. slower recovery if W’ is almost completely recovered). 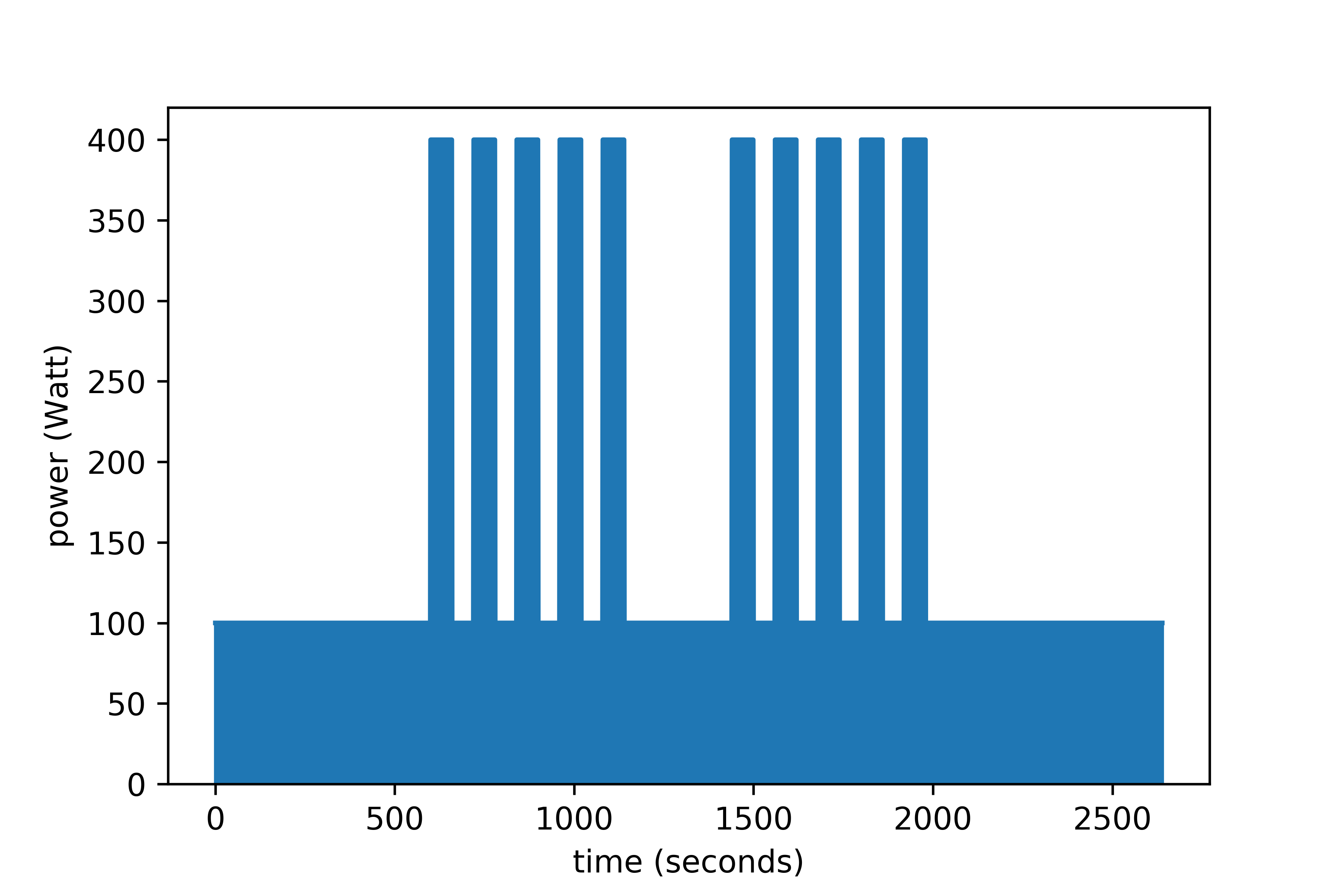 I will start with comparing the two versions of the integral algorithm. First the plot showing W′bal for both algorithms. This plot shows that the difference between these to algorithms is very small, with the Waterworth plot covering the original plot almost completely. 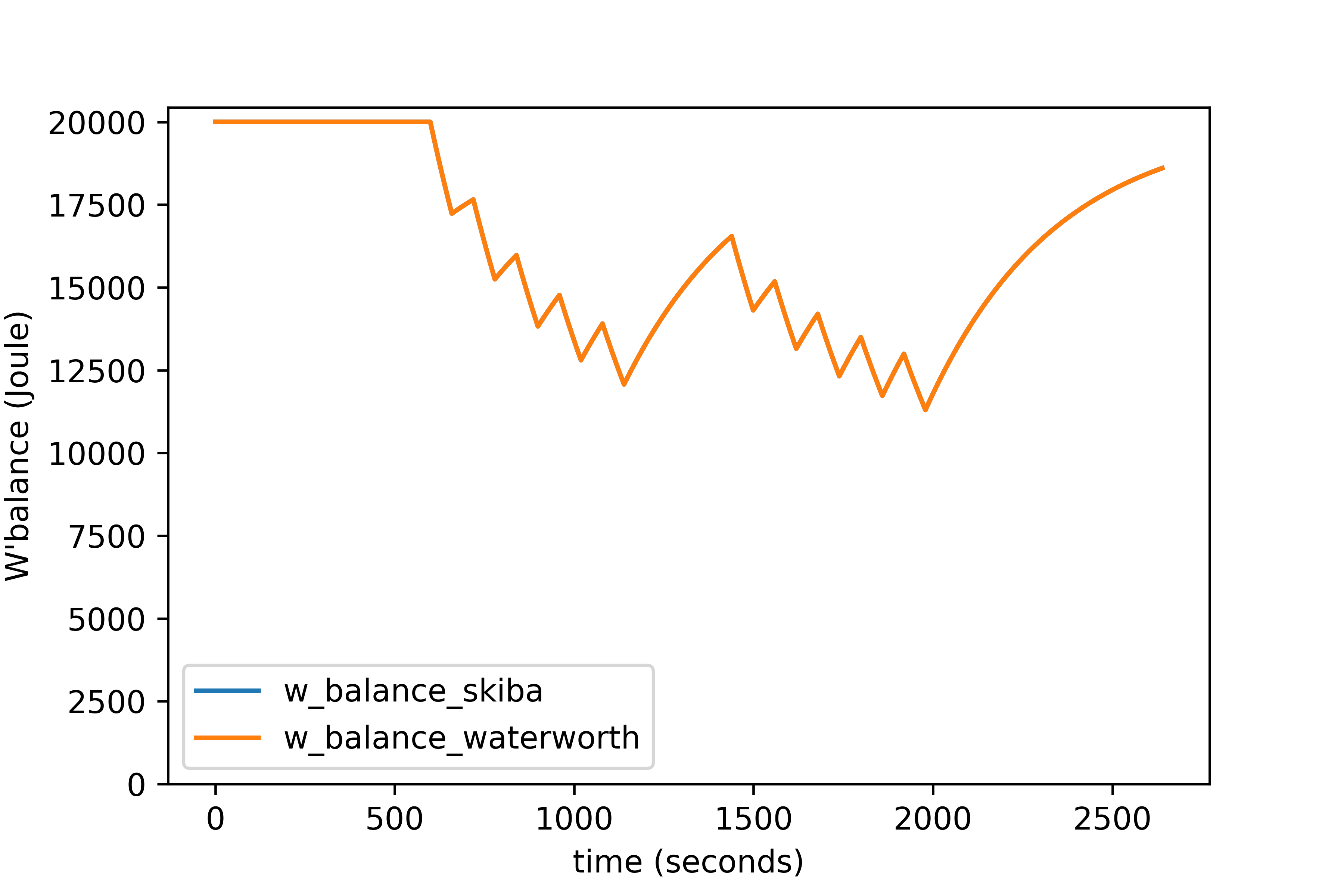 When the residual plot for these two algorithms is plotted it is obvious that the algorithms are almost identical with the maximum difference equal to 5.46 nanojoule… 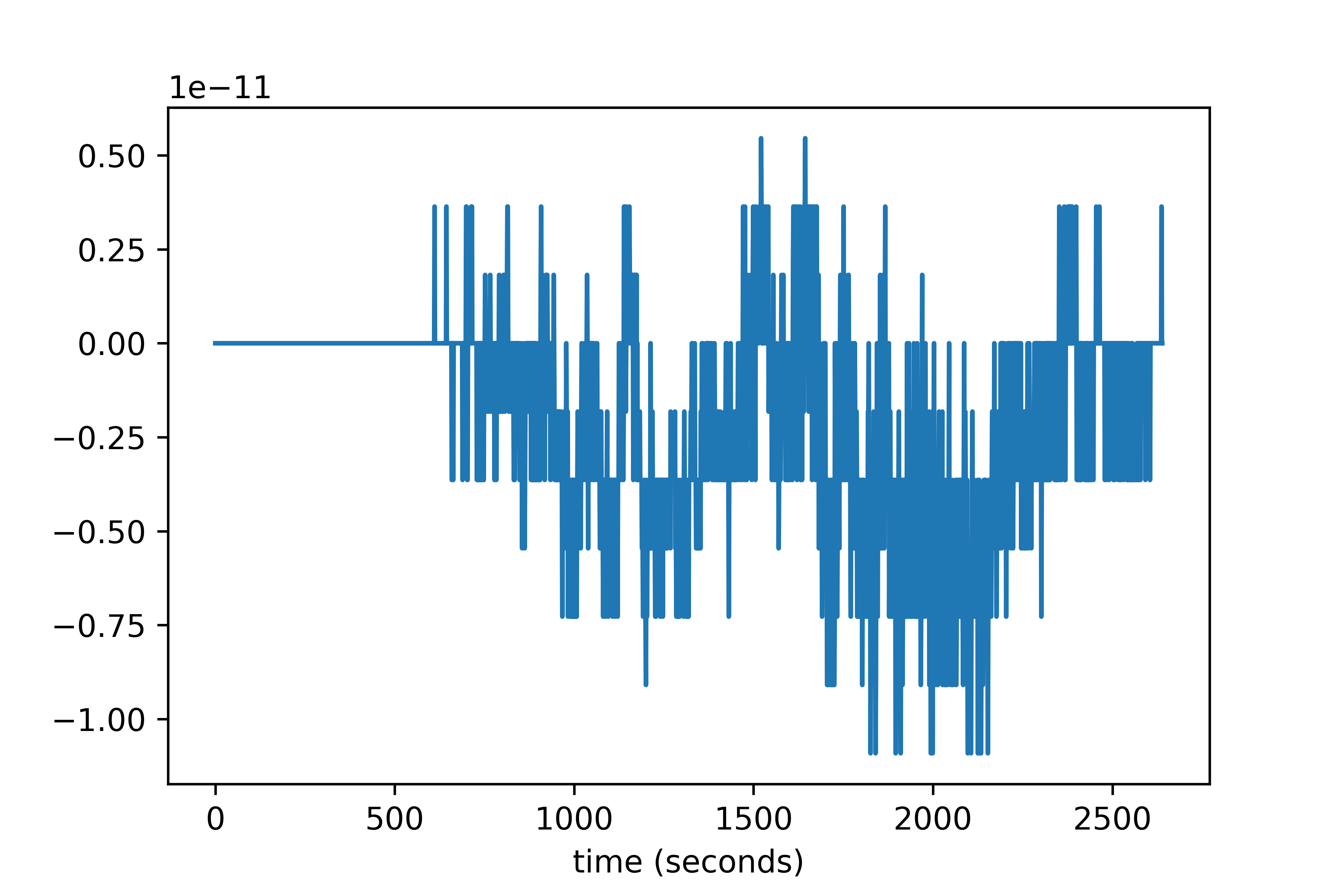 The difference in the recovery of W′bal is a consequence of how the recovery is modeled. For the integral algorithm this is done with the term $e^{-\frac{t-u}{\tau_{W'}}}$ in the equation, where $\tau_{W'}$ regulates the speed of recovery. My expectation is that for different values of $\tau_{W'}$ (or different values for the constants numbers 546, -0.01 and 316) the recovery can be changed to similar speed as the differential model. Similarly, the recovery speed in the differential model is regulated by the term $\frac{W' - W'_{bal}(t-1)}{W'}$ and it is possible to change the recovery speed by multiplying this term by e.g. a factor $\alpha$: $\alpha \cdot \frac{W' - W'_{bal}(t-1)}{W'}$. Although this goes against one of the main reasons to develop the differential algorithm (to get rid of coefficients that have to be determined), I will try to fit this modified algorithm to the integral algorithm in a later article as a proof of concept.

You can find this article including the Python code to generate the plots here.